I am trying to construct a filter, one of whose stages requires a filter to give me the blood relations of a person (without their spouses).

At https://gramps-project.org/wiki/index.php/Rule_expansions is the filter:
People Separated less than <N> degrees of <person>
which includes the option “Include Partners”.

I have followed the instructions in https://gramps-project.org/wiki/index.php/5.1_Addons#Installing_Addons_in_Gramps

And in Plugin Manager - Enhanced - Gramps is the line:
Rule Installed People separated less than <N> degrees of <person> Filter rule that matches relatives by degrees of separation 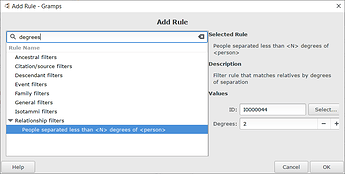 Neither offers the option “Include partners”, and both include spouses as well as blood relations.

I noticed I had the same issue. I looked at the plugin’s files in my user directory and noticed that they did not include the code for the checkbox. So I downloaded the files from GitHub (which do have the code) and replaced the ones in my user directory. Now the checkbox appears, but the plugin manager says it is only version 1.0.0 and an update is available. Indeed the code that I downloaded has version 1.0.0. I don’t know where 1.1.8 cam from or why it did not include the checkbox.

Many thanks. Your solution worked. I have reported the discrepancy at https://gramps-project.org/bugs/view.php?id=12689

@Mattkmmr Does the Addon Management have the most recent (version 1.1.8 vs. 1.0.0) & capable version on these Degree of Separation rules? Or were the 2 “Include” options removed?

The idea behind the change was spliting the filter rule into two rules, but I think I haven’t published both yet.

Thanks for your addon: I use it a lot.

Please would you include an option to include the parents of the siblings who are ancestors of each subject of the rule. The current addon gives a disconnected graph when the result of the filter is input into a report (such as Graphs → Relationship graph).
I want the filter to give me the same people as output by the deep connections gamplet, so that I can share the path between two people but with more detail than the deep connections gramplet gives.
I can get the result I want but it requires four auxiliary filters to achieve this.
Also I’d prefer if both inputs to the addon were filters because it’s more flexible than hard-wired IDs.