When transcribing text written in a foreign language, users probably do not have the localized unicode keyboard that displays the diacritical marks or glyphs.

The special characters can be
typed with the key [alt] and this code:

The LexiLogos site has a series of HTML-script-based virtual buttons for a variety of languages. Not intended as a keyboard but to be used as a bridging technology by providing a unicode scratchpad. 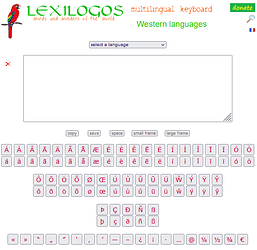 Is there a Python multinational Virtual Keyboard that could be set up in a bottombar gramplet?

I’ve found a couple Python virtual keyboards that were standard US. (Such as the Python Kivy vkeyboard YouTube tutorial: Add Keyboard With VKeyboard - Python Kivy GUI Tutorial #62) But that doesn’t help with unicode.

What I have done is created a To Do note and have the To Do gramplet open on the dashboard.

After searching for the needed foreign character using either Windows’ Character Map or LibreOffice Write I will save the letter in the note ready for the next time it is needed.

Keeping a scratchpad Note and doing a character-by-character copy’n’paste to compose a note is an approach I’d only consider as a last resort.

It is easier to keep the hotlink for the Lexilogos webpage in the ToDo note. Then compose in their online edit box, copy the fully composed note to paste into a Gramps note. The process is a LOT less fussy.

(Copy’n’Paste in Gramps is agonizing because using the Ctrl-C keybinding is so ingrained after 30 years. Since that is remapped to copy to the Gramps Clipboard instead of the OS clipboard, I’d be swearing a blue streak if I used a Note as a unicode scratchpad.)

Keeping a scratchpad Note and doing a character-by-character copy’n’paste to compose a note is an approach I’d only consider as a last resort.

I do not see myself creating whole notes in anything but English. At most, I need to add a letter to a name or the £ sign to a will or a colonial property record.

It is easier to keep the hotlink for the Lexilogos webpage in the ToDo note.

I had bookmarked the link. Now I have added it to my To Do note as a link.