How to make vertical family tree

I’m new to Gramps and have been stuck. I’m trying to render a pdf image of my family tree.

I’d like it to look similar to this format

By which I mean:

I don’t know why I can’t figure it out! Any tips, which report to use, and with which settings?

The relationship graph report has the option “Graph Direction” which allows you to switch between horizontal and vertical direction.

I don’t think there is a way to draw the parents in one box together. 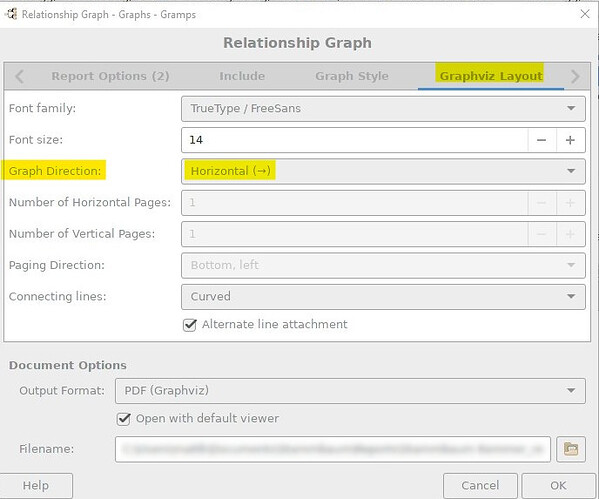 Have you downloaded the Genealogy Treehttps://gramps-project.org/wiki/index.php/Addon:GenealogyTree#Descendant_tree add-on and tried that?

Here’s one of the graphs it offers - the sand lock tree. It is similar to the diagram in your link. However, it does not have couples combined in a single box. (Do you have an example of 2 people in one box in a pedigree-style diagram? That is not a layout I’ve seen anywhere. Although I have seen boxes for 2 people share a common edge.)

If you have not yet tried downloading add-ons, please start. Gramps is a fairly extensive basic starter kit … but the accessories are what makes it great. And they are still free. (So this ain’t an “up-sell”.)

Great, but there are too many lines now: 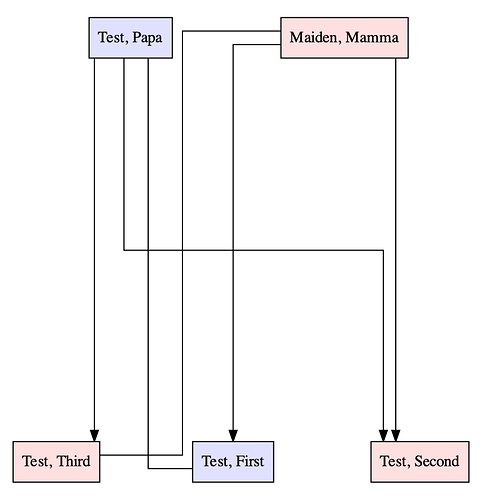 Is there a way to reduce them so that the Papa and Mamma (in example) are joined together, first, before then forking out to the children?

I use on-screen charts for interactively exploring.

But if the chart is for print or sharing, I’ll usually set up a custom filter to export a GEDCOM and import that into yEd.

yEd allows you to dynamically auto re-organize GEDCOM data into a variety of charts then tweak the chart with drag’n’drop.

So it is best to take advantage of another FOSS tool that does that piece of the puzzle.

Thanks! This is a great lead. So, basically, you use Gramps to store the data/metadata, and yEd for outputting for printing. I agree that these two general tasks are quite large and it so it makes sense for Gramps not waste time developing the graphical rendering features.

Regarding your previous comment, yeah I tried the Tree features, but got kind of stuck with MacTex… it wasn’t producing results intuitively/quickly enough for me

You may want to look at the addon Graph View. While giving you the representation within Gramps, there is a print option that will output the current view to an SVG file.