Suggestions for Places that span borders

I have an odd set of place names to deal with. What suggestions are there for dealing with this? And will this be addresses in the new place name system coming up in version 5.2?

Sikeston is in two counties. In the “Enclosed By” field I entered both counties, and did not put any dates on the entries. Gramps shows only one county when displaying or reporting.

There are two cemeteries in Sikeston that I need to enter. One of them is on the Scott County side and the other on the New Madrid County side. I want these cemeteries to show up in reports as being in the proper county.

Is there a way to do that without creating two entries for Sikeston?

I probably have other cases where this occurs, such as Kansas City Missouri which has parts in no less than four counties.

In Paris (and some other cities), France, we have what we call arrondissements. 20 divisions of Paris, each with its town hall and civil status.

Some streets may have part of the house numbers in one arrondissement and others on the same street in a second arrondissement. It looks like a partition between the administrative (the name of the streets, the division of the arrondissements …) and the location of the buildings in these streets which is very physical whatever the administration does. I saw a remark of this kind in a GEPS. I also don’t know if the next version will do anything for that kind of issues which look like yours: one street enclosed by two arrondissements and a subset of the street, here house numbers in that street, distributed between structures above the street from where these subsets depends.

I think the only way to make this work will be to make two places, one in Scott county, the other in the New Madrid county. This would make the Lat/Long coordinates a bit more accurate as well. It may be that back in time, the city was only part of a single county; the date part of enclosure would make that clear as well.

I don’t see a really good solution, but here is one option. You could just place each cemetery within its township within its county, if it’s not so important to see “Sikeston” on the report. Anyway, you can also have the lat/lon coordinates for each cemetery so that they show correctly on a map.

It might be nice if Gramps allowed an event to be assigned to multiple places (which are actually one place, but can’t currently be represented that way). In that case, the city could be subordinate only to the state, and an event could be located in a city and also in a particular township.

There is an interesting idea … It won’t work in this case since all townships in Scott County, Missouri are inactive. I also cannot find which townships contain the parts of Sikeston. With a city as small as Sikeston there are likely to be only two townships. Kansas City, MO is likely spread out over a dozen or more. That would be a royal pain to set up.

So far I have not gone down to street addresses for most of my entries. It seems to me that streets crossing arrondissements are not quite the same kind of problems. Streets are not political units.

I can think of some places where there might be a similar issue! Turning again to Kansas City, there is a street called State Line Road. The state line between Kansas and Missouri runs right down the center. Odd-number addresses are in one state and even number addresses are in the other state. I think Gramps could handle this easily since all addresses can be cleanly divided into one or the other county and state.

I also cannot find which townships contain the parts of Sikeston.

In case it’s helpful for other purposes, you can see township boundaries on the National Map. In the Layer List, under Governmental Unit Boundaries, select Minor Civil Division within both the Labels and Features sections.

If all I need is a single location Sikeston, I would put it in the county where most of the city is located. Now that you need locations within the city, an entry for each county makes the most sense as suggested by @prculley

The solution for this in the New England state: we change the boundary of the county. 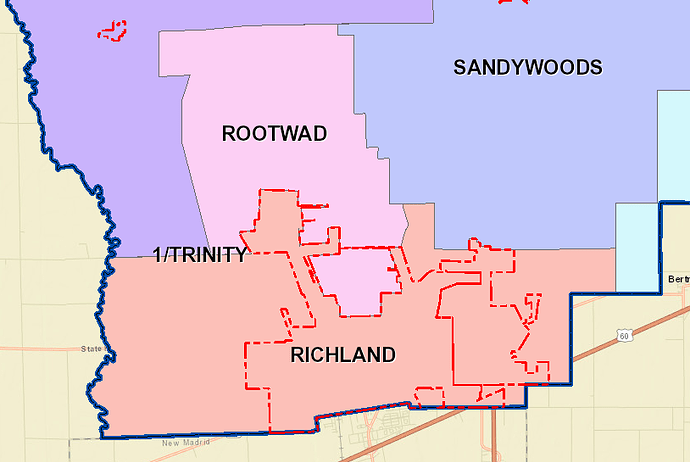 And it appears to be surrounded by Big Prairie township in New Madrid county. (Scott county was split from New Madrid.) 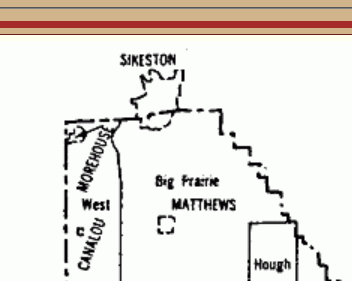