How do you include a URL for a citation?

5.1.5 Win10
I’m having a hard time finding a good place for a citation ULR.
Background, I do all my research in GRAMPS and then create a gedcom and upload it to WikiTree. I have honed my process that the data appears in WikiTree fairly well.
However, many on WT like the URL to the source.
The citation with the data from the Page field and the Notes go up with no problem. But many times I don’t want to create a note as it is displayed separately from the citation details.
I have also found that citation attributes are not included in the gedcom, so that rules those out.
The only way I can think of, is including the ULR in the page field, which may get very long at times.
It would be great to have a field for the URL that is appended after the Page field in the gedcom citation.
What do you do?

You could add some of the URLs manually in WikiTree, then export a GEDCOM from there, and see how they are stored in the file. That might give you ideas for how to store them in Gramps, so that it can export a similar GEDCOM.

Also – have you looked into using WikiTree’s External Link Templates? Those might fit better within the Page field of a citation.

I do all my work in GRAMPS. All I do in WT is some minor formatting like adding line breaks.

Right. But what I mean is, you could include information in Gramps that might work better in WT. For example, consider the example they give for a Family Search image.

I’m interested in whatever you end up doing, because eventually I want to add more people to WT myself.

I have not tried this myself, just reading their documentation.

Yes, we are on the same page ;-).
Most my work is cut/paste so a Volume/Page: field may look like this.
ED, institution, or vessel: 1 Household schedule number: 15 Piece: 915 Folio: 13 Page number: 20 Ann Hitchcox discovered in 1861 England Census

(The ULR in this blog is converting it to a text string, not the raw URL)
If this is the best that it could be, then I’ll have to work with it. It would be nice to have a field just for the URL throu…

Maybe you could collaborate with one of the developers of Helper Apps for WikiTree?

Rather than a WikiTree app, I can think of two useful gramplets (not sure if either is feasible):

But first, I would still try to figure out how to make the GEDCOM upload give me the desired results, by playing around with how the values in the file are formatted.

Maybe I wasn’t clear. I cut/paste from many sources such as Ancestry, FindMyPast, FamilySearch, etc into GRAMPS to build the source data. When this is completed to my satisfaction, I create a gedcom of the completed work and upload that to WikiTree. The GEDCompare on WikiTree does the matching and fills in 99% of the fields and Bio. I just need to add some line breaks to fix the formatting in the notes. The WT gedcom import does most of the work. I’m lazy, so I’m not looking to add work to my process flow. I’m looking for a way to improve the flow and format. I’m already maintaining 4 family trees on 4 platforms. I really don’t like working on WT because I hate working in html. WT is the 3rd down my priority list.

@grocanar have created GedcomForGeneanet for the same reasons, it transfers some information (citations attributes, …) to notes to make them appear on Geneweb, the engine behind Geneanet. 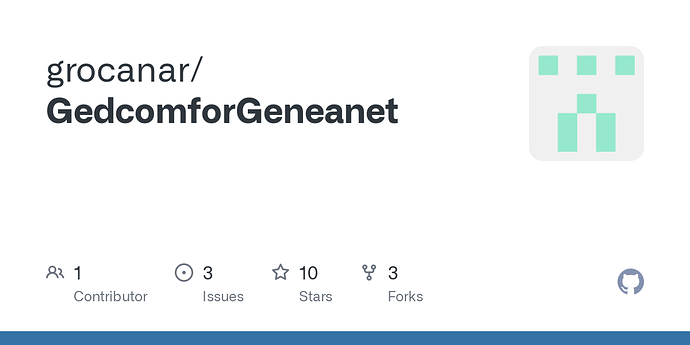 Contribute to grocanar/GedcomforGeneanet development by creating an account on GitHub.

I already have the inspiration, but I lack the ability!

I wonder if someone else had already written such a thing? Is seems there could be a number of plugins that people have written, like that one, which are unknown to the broader Gramps community.

Me too. Lacking the coding skills. We need a GEDCOM3.
What we need is an enhancement to the Volume/Page field that fits within the Gedcom 5.5 definition.
If we think of the Attributes as an extension to the Page field, it will meet the gedcom definition (as I read it).
If there is an Citation Attribute that is NOT NULL, then append it to the PAGE field by adding a comma (suggested in the def) and 2 spaces (for separation) then the Citation attribute text.
We do not want to make the attributes a note as this is already handled in the code.
In Gramps, the attributes are dropped, which I think is a mistake.
It will not matter what the attributes are called or how many there are.
This is what the line in the Gedcom file might look like:
3 PAGE the page number for the death., THIS IS WERE THE URL WOULD BE LOCATED.

I looked at the GEDCOM 7 standard yesterday, and there are a couple of places where a WWW tag is already used, like for the site of a repository. And we also have a couple of attributes that are already exported in our standard GEDCOM, like _FSFTID and _UID.

Abd if these are there, why not add WWW too, possibly in our GED2 exporter.

I manually edited the gedcom file and uploaded it to WikiTree to see what would happen. Wikitree handled it as expected. See below.