Gramps has a Calculate Estimated Dates tool to facilitate critical features. (Such as “probably living” and timeline features.) 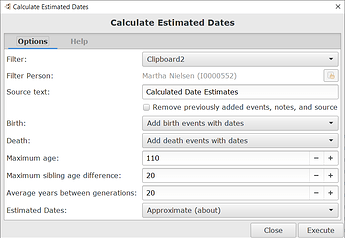 The Geography view mapping skips mapping any Event where the Place does not have coordinates. They need “estimated coordinates”

A tool that estimates/inherits coordinates from the Enclosing Place (like a date is calculated from a Parent generation) would put a Event in the general region in a Geography plot.

It would have a bit more difficult problem than Calculated Estimated Dates already mishandles. (That tool will happily remove Events that were modified AFTER the citation/source was created. That seems … risky. Shouldn’t it bring up a deletion confirmation for those and the Citation/Source associated with them?)

I don’t know how estimated coordinates could be tagged with something visible in the Edit Place dialog. (Place coordinates don’t have the description field to hold the “Estimated <event> date” or have an “estimated about” modifier for the values.) Nor how the tool could protect modified coordinates from a “Remove previously added…” option. They will have been initially estimated and marked with a Citation but do the coordinate fields have a timestamp separate from the other Place fields?

Maybe the 5.2 Place model can have a “Fallback” coordinates feature?

A tool that estimates/inherits coordinates from the Enclosing Place

I agree that in either case it would be good if it used a different type or color of pin to identify them.

The thing to consider that each view would have to be revised to do a pin color or do the coordinate inheritance on the view side. Then the “within __ km/miles” filter & reports would have to be changed.

Any null coordinate compensating change needs to be on the data side if those places are to be plotted in ALL the view modes, filters & reports.

” (octagonal stop sign) for invalid highlighting. If there’s a Citation from a specific Source (comparable to the “Calculated Date Estimates” spouse the other tool creates), then render the coordinates in a “color with

One problem adding ‘near’ or calculated GPS coordinates, it would negate the Look up with Map Service (right-click from place list). When there are no coordinates, the selected map service will search by the name of the location. Once there are any GPS coordinates those coordinates are used to open on the map, no other search is made.

Like the Calculated Dates, the tool would be intended for temporary use. You run the tool, run the report or chart, then flush the calculated data