Hacking with Display formats for names

Interesting. So, you are creating a Monogram placeholder for 4 core surname lines in your Tree by repurposing the Family Nickname. (I did not write “Initial” because in computer usages, this could be mistaken for a form of “initialization”, or setting of a default form/value,) I had mistaken the objective as populating the Tree with a commonly used Family Nickname.

I have not tried it, but I wonder if a customized Name Format (created in the Display tab of Preferences) of the “Display As:” might be an alternative approach. And one that could be applied en masse for a Surname.

It would require some experimenting. Because I suspect you would have to create 4 display format templates (since there isn’t an automatic Monogramming format). And I am not confident all Report/Chart features will apply the “Display As”. (The individual contributing programmers had varying familiarity with the Gramps name options… some may not have even realized that pre-formatting exists.)

Maybe there a way to write a custom format in Edit->Preferences->Display->Name Format to display part of a Surname in the chart (Eg: Schwarzendruber as sh). I am not aware of how to do it.

My idea is a to print a chart with all members of a certain family along with 2nd cousins and their family names. Since there is not much real estate in the chart, I wanted to show a short family name with a legend on the side of the chart. This monogram helped, even though it may not be the most elegant way.

I clicked Edit button for the Name format: in the Display tab of Preferences.

Then Added 4 lines and Edited them to be as follows:

After that, those 4 override Monograms were menu options for the Display and could be applied to people in an ad hoc manner. 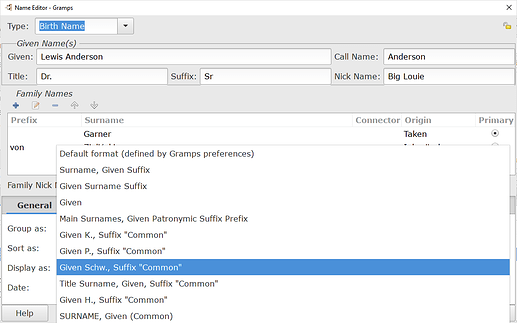 After that, those 4 override Monograms were menu options for the Display and could be applied to people in an ad hoc manner.

I never try that, and I’m going to use it now for all my Group as persons !

Do you know how to set these Sort as and Display as fields using SuperTool ?

I haven’t searched for that. But it seemed like there might be too few Name fields in the Person object Help of SuperTool.

My big concern is that some Display Name customizations seem to have disappeared from Preferences when I switched repeatedly between Trees. (I switch Trees a LOT for testing techniques & tools ) 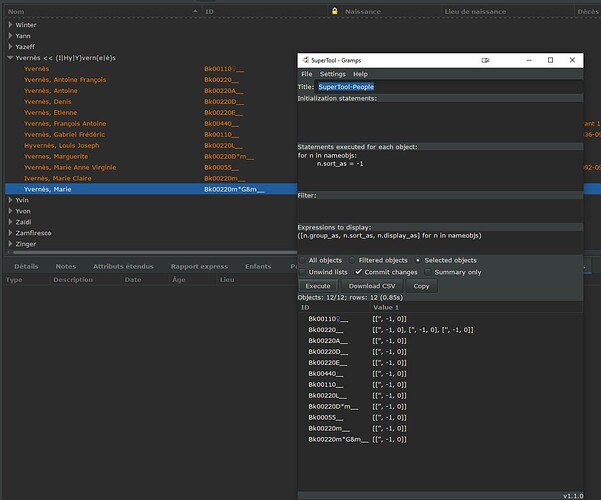