Some years ago, I became aware that my ancestors from Cornwall arrived in Canada as part of a group of inter-married families. I think there was a minimum of 6-8 families but it could have been a lot more. I find this fascinating–immigrating in the 1830’s wasn’t easy and yet a sizeable group formed that all agreed to take the leap. The main connection among the “group members” was marriages. In-laws and cousins.

By chance, I came across a Zoom presentation last weekend on this subject. A fellow, Wesley Johnston, wrote a book on these sorts of associations:

He calls this a “Family Thicket” since it is a bunch of inter-twined trees. I’m trying to locate a copy of the book.

In his presentation, he showed a chart with lines between surnames representing marriages. (One line even showed a loop representing two people with the same surname getting married. Which exists in my tree, as well.) He apparently used a piece of software called “yEd” to create the chart. 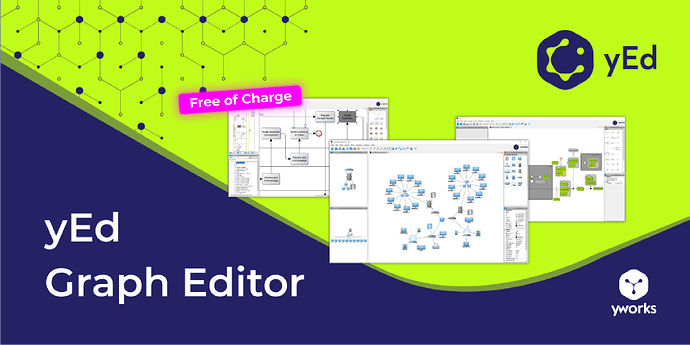 yEd is a free desktop application to quickly create, import, edit, and automatically arrange diagrams. It runs on Windows, macOS, and Unix/Linux.

I don’t know if yEd has some special features or if something similar could be created with GraphViz, etc. Perhaps I could have Gramps export a set of marriages, in Cornwall, prior to the date of the immigration to get a start on understanding the connections?

Has anybody else explored this kind of analysis? 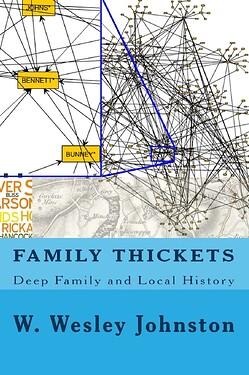 As far as I know Gramps only creates directed (hierachial) graphs. What you are looking for are undirected (network) graphs. GraphViz is capable of creating them too, but creating them with Gramps needs to be implemented first.

I think you can import GEDCOM files with yEd. Maybe it is also posssible to switch between graph types?

My thought was to produce an extract from Gramps and use that data to create something with GraphViz. Although I’d have to learn a lot about GraphViz, as well.

Yes, you can open GEDCOM files in yEd. At first it might give a very unsatisfactory graph like this:

When you zoom in, you can see that it is a normal looking tree:

But then go to Layout → Organic to get the kind of view you are looking for:

There are many options you can experiment with. You can also just select groups of people and move them around manually.

I want to check with my local library to see if they can obtain a copy of the book. Unfortunately, they are having problems with their web site at the moment. I may pop into a local branch and see what they say.

To get the kind of graph shown on the book’s cover, you would need to create your own input file containing just the from/to links between surnames. See yEd documentation possible formats.

Thanks, I hadn’t realized that the web graphing facility is both free and has genealogy examples!

However, AFAICT, it is showing the lineage connections (parent-child) between individuals. AIUI, Johnston’s chart shows the marriage connections between various families (surnames).

For example, suppose I had 4 people: 2 sisters (same surname) and they each married (spouses have different surnames). The chart I’m looking for would have 3 boxes, one for each surname, and lines showing a connection between each husband’s surname and the surname shared by the sisters (two lines). A list of marriages with the surname of the bride and groom would appear to be a good start. Of course, I have a few marriages where I haven’t been able to determine the bride’s maiden name so I’d have to work around that.

For example, suppose I had 4 people: 2 sisters (same surname) and they each married (spouses have different surnames). The chart I’m looking for would have 3 boxes, one for each surname, and lines showing a connection between each husband’s surname and the surname shared by the sisters (two lines). A list of marriages with the surname of the bride and groom would appear to be a good start. Of course, I have a few marriages where I haven’t been able to determine the bride’s maiden name so I’d have to work around that.

An online GraphViz Example for your case. The online editor should work for small graphs.

Thank you! I played around with your example and it seems to do what I was thinking. Really, all I need to do is extract a list of marriages as the lines and then a list of the unique surnames for the boxes. I’ve never tried the SuperTool but I imagine ought to be an easy-enough option.

Now, if I can just find a block of time!

Just go to the Families category view and select Family Trees → Export view. The resulting CSV file will have the family ID (which you can use as the edge ID) and the spouses’ names. But first, go into Preferences → Display and create a new name display format that includes only Surname. That way, you won’t need to do any parsing of names in the CSV file, and the surnames will be the node IDs.

I have a question for you, though (realizing that neither you nor I have read the book that you mentioned). By looking only at the connections between surnames, will you really capture the extent of intermarriage among the families, if it’s the case that each person takes the surname of their father? I’m not sure how to do the analysis differently, just raising the question.

As a side issue, your post implicitly poses the question “what is a family”

Which is a tough question.